a wildetects reflection of full circle.

Haven't really posted anything on this blog this year - not that i haven't been really super busy - its just Ive been busy saying it in other arenas of my life. introspective reflective is a thing,  i think, the thought of  the mouth whispering in the darkness and wondering if the ear is listening. i have seen many rather eccentric people speaking to themselves on the roads - whether i am present or not doesn't stop them from having intense conversations to the ghosts of their past. they don't need my or any one elses ear - they need to simply get whats in their head,  past their mouth,  to empty out the crowded space within. that's exactly like how i see my blog, for me really,  not for the odd person who might stumble on whats written.

to conceptualize a futuristic creative idea is the unicorn of thought to my mind - ones focus blurred as you look through the ether and the limited telescopic lens. is it so important to imagine a future artistic aesthetic - not like a sage looks into the future but from a,  "what will artistic expression be like  in the future or what will our building aesthetic move towards"  - i used to think this was very important and it surely is on some level,  however i see now being present in the moment,  is far more powerful.

Architecture is sculpture and to my mind the more dramatic the perceived movement in the sculpture,  the more visually appealing the static,  perceived kinetic architecture (wildetect PKA) this concept has long been an experimented wildetect ideal for me. to go full circle on any journey is always an interesting trip, sometimes it can be a very, very sad one.

A friend of mine, who used to capture hunting moments for men with very big guns and very small brains and even smaller unmentionables.  told me a very sad story once. the kind of African tale one hears far, far to often. Africa's highways and byways are full of ancient wisdom, some of this wisdom is sadly not learnt by the participants in the tales told.

many years back on his very last such filming contract,  he filmed a crew of foreign hunters who where trying to  hunt a magnificent bull elephant,  in a remote part of the African wilderness. the type of little men, who feed the complete lie that one takes on the spirit energy of what one kills. youve all seen the photos of them ghoulishly smirking over the lifeless remains of their latest bloody conquest. wanting so desparately for you to now believe they are a lion or a mighty elephant or a rare panther.

This bull elephant , a magnificent creature led them for several days through the deepest African terrain. always out witting, out smarting and out playing the  tiny single minded ambitions of the pursuing gaggle of less than men.  Then rather suddenly , at some point during the long exhausting chase , this magnificent creature, determined as it was,  just started heading to the exact spot that they first encountered him. he had led them full circle for many,many miles and days - this wise, now very tired of being chased, old african creature might have realized in this simple statement ,  that he was making,  that he had chosen to take a stand where he first encountered this determined threat. he realised he had no other option from this virulent cancer on his six. these minuscule minded, frothing merciless trophey hunters, sadly didn't feel a reprieve might have been in order for this intelligent gesture. they used their off shelf, mighty little weapons on a less than human endeavor and blasted the creature to kingdom come. as this incredible creature vacated all its systems due to absolute fear of earths immediate future,  from imbecilic man, who sadly it appears is now, it seems in full control. my friend silently put down his camera and walked away, this was not chivelry, bravery,  this was small minded blood lust. he decided to partake no longer in such a display of false unintelligent merciless bravado.

my point is that full circle is something nature is aware of and needs to be explored more by those amongst us who deeply care. and when one finds full circle moments within oneself - its a good thing at that point to stop and smell the roses. sadly for this magnificent elephant,  his magnificent journey ended in a very remote part of the world, but the shadow he cast and the lesson he gave,  can live on for those sensitive few amongst us - yes, you know who you are.

trying to catch a synaptic thought into the realm of architectural reality through sculptural inference is a challenge. below  is an example of a sculptural design taking into account perceived kinetic architectural ideals  - looking to build this architectural creation at some point. a part of the cresting wave moves back to take care of an incredible view of nature. but solitude and privacy within the space is also an important view - a view into oneself,  from which you can awaken, full circle.

so ear,  have you been listening to what my mouth has just whispered? 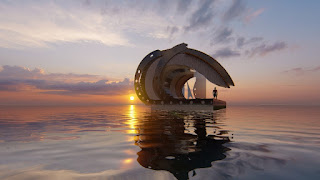