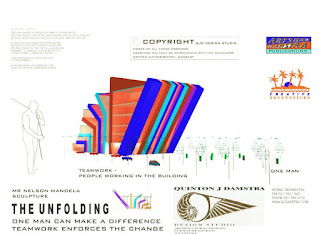 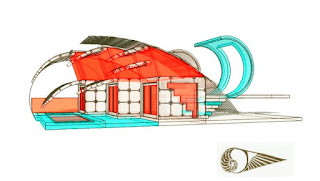 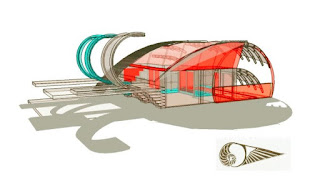 I became familiar with this concept when i had the huge privilege of working as a sculpture's mould maker. When working with a sculpture that can actually accomplish a frozen moment in time, you are completely humbled by this artistry this sublime ability.
It was at this point i came across this next concept - not a new concept - but new for me. the concept when applied to Architectural design creates an array of dynamic possibilities.
when standing next to a sculpture that appears to be a moment frozen in time, a perceived energy awaiting the magicians wand is evident. an energy to release the frozen sculpture and allow it to go on its way. An accomplished sculpture is able to achieve this perceived kinetic energy.
In the unfolding office block the perceived potentail energy is the fact that the building appears to be pulled open by the life size sculpture of a man in front. The idea hinges on the idea that one mans efforts can achieve the impossible. The life size sculpture is that of a man the calibre of President Nelson Mandela. The idea is that one man can make a difference - teamwork (the office workers) enforce the change.
the wave house is another sketch in the perceived kinetic architecture series. creating a sense of movement in the static, fluidity, a moment frozen in time. I will continue to explore this concept and hopefully through time and suggestions improve the concept into a dynamic possibility.
My Madusa virus chair is another example of perceived kinetic energy -(see blog - erxells furniture launch)

the concept of creating the illusion of movement in the static is a very strong wildetect and african fauvistic ideal. one of the wildetecture ideals  is to as much as possible tap into the unstoppable drum beats of an african continent bursting with dynamic energy.
Posted by QJD wildetect at 10:31 AM