The creative mind in an age of complete destruction.

This last while has been an immensely challenging time for everyone that I know -  using ones personal difficulties as a reason for not pushing forward,  is not really received by others as sensitively as in the past. Mostly because every single person that  I know,  in the last year has had things happen, that are really incredibly difficult to try and process. so one just starts comparing personal tragedies and then that's not really a conversation to wrap around, to try go forward.

This next concept is not exact science, more opinion than fact, however its my process of trying to understand a bigger conceptual picture.

As an artist or creative person,  life works through ones very flesh and bones. My limited experience with analytical thinkers or engineering minds, they tend to have programs within their make up that can helpfully screen or deflect aspects of life. Perhaps it helps them cope better with world wide tragedy on a grand scale. It appears to me they don't process global tragedy in the same way as a creative artist does.

An analytical engineering mind will look at a news article about a tragedy far across the globe , process that they cant really do anything to help - and move on with what they can control. An artistic mind takes in the same information and is completely shut down by the immense insecurity and suffering of it all.

Perhaps one can liken it to the effects of a nuclear blast - some victims are instantly vaporized where they stand, the full intensity of the nuclear blast passing through their very flesh,  leaves their individual permanent shadow behind as the only evidence they ever existed. This is how an artist creates, to my mind the permanent shadow is the intensity of the artistic work left after dealing with the process of life.

Engineering minds are able to stand behind a screen of sorts, so they don't experience the blast passing through them - so their is no permanent shadow as evidence. Both ways of dealing with the same scenario are necessary for human development to my mind. just one has a much greater toll on the individual at the end. Perhaps our perception that its mental illness is not correct, when its more than likely a reactive process to life passing through one like a nuclear explosion.

Artists work that resonates the most with me is  that which captures the intensity of living within this life,  as if life is passing through the creative,  leaving this permanent shadow as artistic evidence to behold, unpack and collectively experience.

I used to think creativity left behind a portfolio of skeletal thought as evidence. mostly useless sketches of thought, all leading towards some type of proof towards the improving talent of artistic perfection in the individual.

However as world wide tragedy escalates,  I'm seeing the role of the artist is to create permanent vaporized shadows as evidence of life. Perhaps for a warning to future sensitive minds. Alarmingly the tragic lesson being learnt after life has been lived fact.

Scientific observing minds that peer into the building blocks of life are vastly different to the creative scientific mind that actively seek to manipulate and weaponize its minute structures.

Those that are content to observe, witness and those that will, "oh so easily", manipulate what they can. To then blindly stand back and watch the after effects of their sinister handy work , to carefully document so they can repeat cut paste.

Well very sadly, we are now dealing with the after effects of those that scientifically fiddle and manipulate to watch effect. These little minded nameless greedy idiots that seek to carry greater weapons of control, simply prove that man is a complete fool, who has proven beyond a shadow of doubt, that he cannot rule himself.

So as we now observe the stage being set for our own chaotic apocalypse, its the creative artists silent vaporized artistic shadows that will leave small evidence,  in an age of complete destruction!! 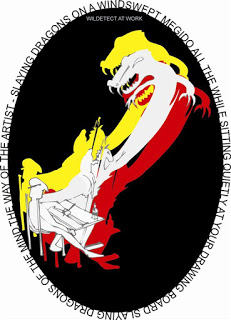